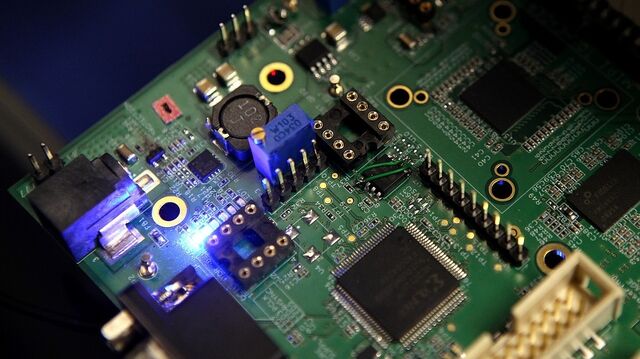 The Shanghai-based manufacturer is shipping Bitcoin-mining semiconductors built using 7-nanometer technology, industry watcher TechInsights wrote in a blog post on Tuesday. That’s well ahead of SMIC’s established 14nm technology, a measure of fabrication complexity in which narrower transistor widths help produce faster and more efficient chips. Since late 2020, the US has barred the unlicensed sale to the Chinese firm of equipment that can be used to fabricate semiconductors of 10nm and beyond, infuriating Beijing.

A person familiar with the developments confirmed the report, asking not to be named as they were not authorized to discuss it publicly. SMIC climbed as much as 1.9% in Hong Kong, while Chinese chip and chip gear stocks including Shanghai Fudan Microelectronics Group Co., Naura Technology Group Co. and Advanced Micro-Fabrication Equipment Inc. gained more than 5%.

SMIC’s surprising progress raises questions about how effective export controls have been and whether Washington can indeed thwart China’s ambition to foster a world-class chip industry at home and reduce reliance on foreign technologies. It also comes at a time American lawmakers have urged Washington to close loopholes in its Chinese-oriented curbs and ensure Beijing isn’t supplying crucial technology to Russia.

The restrictions effectively derailed Huawei Technologies Co.’s smartphone business by cutting it off from the tools to compete at the cutting edge -- but that company is now quietly staffing up a renewed effort to develop its in-house chipmaking acumen.

Previously, SMIC has said that its core capabilities stand at 14nm, two generations behind 7nm, which in turn is roughly four years behind the most advanced technology available now from Taiwan Semiconductor Manufacturing Co. and Samsung Electronics Co. The company has worked with clients on technologies more advanced than 14nm as early as 2020, it said on an earnings call that year.

China-based MinerVa Semiconductor Corp., which is named as SMIC’s customer in the TechInsights report, showcases a 7nm chip on its website and said mass production began in July 2021, without specifying the manufacturer. Dylan Patel, chief analyst at SemiAnalysis, was first to note the report.
Representatives of SMIC and MinerVa didn’t immediately respond to requests for comment.

The labels attached to generations of chip production technology have become increasingly controversial as they no longer represent dimensions of the microscopic transistors that give chips their electronic function. Companies have accused each other of mislabeling their products to make them appear more advanced than they actually are.

And while the ability to produce a small number of chips using the next level of production technique signals that a company is making technological progress, what determines economic viability -- under normal circumstances -- is yield, or the percentage of every production run that’s successful. Intel Corp, once the leader in production technology, stalled on one type of production for five years because it couldn’t get enough viable chips to make it profitable to introduce that node into mainstream production.

SMIC is not operating under standard business conditions however. It is critical to China’s ability to produce chips domestically as the US tries to undercut the country’s tech advancements. Beijing may be willing to subsidize losses at domestic competitors like SMIC -- out of fear its companies won’t have access to key components.

The Trump administration blacklisted SMIC about two years ago on national security concerns, citing the company’s ties with the Chinese military, an allegation the chipmaker has denied. Following Washington’s move, American equipment suppliers have been banned from providing the Chinese company with gear “uniquely required” to produce 10nm or more advanced chips without licenses, although it is not clear exactly what the US Department of Commerce has allowed domestic firms to sell to SMIC since.

Huawei and SMIC Scored Billions in US Licenses, Lawmakers Say

US Senator Marco Rubio and US Congressman Michael McCaul have repeatedly urged the department to tighten export control restrictions pertaining to SMIC to strengthen US security and ensure China is not transferring technology to Russia and helping Moscow evade sanctions.

“The Biden Administration will continue working to grow and strengthen our cooperation with allies and partners to ensure effective controls on semiconductor production so that we remain generations ahead of competitors in advanced semiconductor technology,” a spokesperson for the Commerce Department said. The National Security Council did not immediately respond to a request seeking comment.

SMIC has said that its blacklist status hurts its ability to develop sophisticated technologies. The company’s capability is severely curbed by its lack of access to ASML Holding NV’s extreme ultraviolet lithography (EUV) systems, which are required to make the most advanced chips that include 5nm and 3nm geometries. The Dutch firm has not shipped a single EUV machine to mainland China because of US pressure on the Dutch government.

US Pushes for ASML to Stop Selling Chipmaking Gear to China

The administration of President Joe Biden at one point considered tightening restrictions around SMIC but ruled out any unilateral action to allow for more time to negotiate with other trading partners. Those talks have not borne fruit so far. Washington is, however, pushing ASML to stop selling even less advanced gear to China.
SMIC told analysts in mid-2020 that a large share of the equipment it has for 14nm chips can be used to make more advanced chips and it is seeking to develop more sophisticated technology to improve its profitability.

— With assistance by Yuan Gao, and Ian King